Things have been quiet around here of late and there’s a chance they will remain so.  Life has become rather full in the real world so my opportunity for navel gazing on’t interweb may be rather restricted. But we shall see, you never know.

Anyway, before I commit to a 2019 Make Nine, I thought it would be useful to take a look back at how I got on last year.

The Make Nine challenge asks you to pick 9 patterns that you are going to make up over the next 12 months.  I found that the first time I did this, it resulted in my buying lots of new supplies and not doing much with them. So, last year, I paired up fabrics from my stash with patterns I already had in an attempt to make things I’d wear out of supplies I already owned, rather than expanding the stash. I also incorporated several of the Sew My Style garments.

This is what my grid looked like last January.

Well, not bad actually.  I completed 7 out of the 9 garments listed above (thankfully I didn’t include blogging them in the challenge!)  The ones I missed out were probably the least practical; the Deer and Doe Zephyr and Bleuet dresses.

I’m slightly sad these didn’t get made as they are both still very appealing to me.  However, I will accept that I was probably least likely to wear these two so it’s no big shock that they didn’t make it to the top of my to sew list.

Of the ones I did make, I would say that the biggest successes were the Lander shorts and the Portobello trousers. 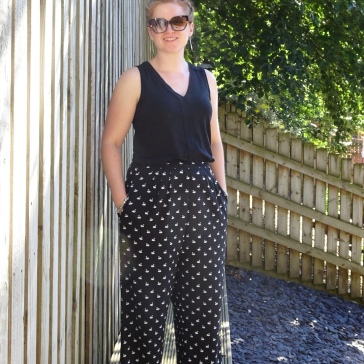 Both of these formed part of my continuing mission to improve my ability to fit trousers and both were staple parts of my summer wardrobe.

So how about the less successful then?

First up, there’s my Kalle shirt.  This one’s a little strange because I really loved making it, was very pleased with the fabric match to the pattern and thought the finished garment looked pretty good too.

I just didn’t wear it.

Maybe it’s because I went with the tunic length and it’s not something I reach for? Or because we had such an usually hot summer that skinny jeans were not on my radar? Hard to say, but I’m hoping to get some wear out of it this year.

And in the absolute disaster pile, we have the Florence and the Marigolds.

I hated the Marigold trousers I made.  Hated them. Which was incredibly sad because the material was so beautiful. But realistically, elastic waisted tapered trousers sitting on my natural waist were just a disaster.

Florence felt good initially, and garnered many positive comments on Instagram, which is always nice.  But Mr RW HATED it and after I saw a couple of full length photos from a meet up I wore it to, I decided that actually, I agreed with him.  In a plainer fabric it might have been a hit, but head to toe busy print was too much for me.  It’s been consigned to the recycle pile; I’m hoping I might be able to get some floaty shorts for the girls out of the skirt panels this summer!

It’s fair to say, then, that in many ways my make nine was not the greatest of successes. However, I enjoyed having a semi plan in place whenever I was in the mood to sew but lacking inspiration for the next make.  I also stuck completely to my planned fabrics, which was fantastic and felt good at the time too.  And so I think I will put together a make nine for this year too.

Away from the Make Nine, I had a very busy sewing year.  I used the Sew DIY planner to keep track of what deadlines I had and sat down at the start of each month to consider what I wanted to make that month, which was far more intentional than I have previously been.  Again, I enjoyed this and would look to do the same again this year once I get my backside in gear.

It was a great way as well to remind myself that I have actually been productive, particularly when my over achieving brain was trying to tell me that I hadn’t.  Apparently, I made 116 items last year.

Big surprise, my peak month was July, immediately before our holidays when I made 16 items in a month.  This was closely followed by November (13 garments) – a combination of birthday and christmas sewing.

My feeling that I had lost my sewjo rather towards the end of the year is pretty accurate too; at the start of the year, I was averaging 7 garments a month, whilst by October I was on 4.  One way or another, I made 18 pairs of trousers last year; don’t get too excited though, there was a fair amount of baby gift sewing in there and baby trousers are both easy and cute!

So, there you have it.  Random wafflings about last year.  All in all, sewing wise it was a pretty good year.  I expanded my skill set and, despite several failures, I also added lots of very usable and wearable garments to my wardrobe.  I tried new styles, some of which were failures, and I finally, FINALLY, made jeans.

They could fit better, but I made them.  And this year, the next pair will be better.

How was your year?