Hope you’re surviving a rather grey and miserable February? Or is that just my little bit of the world?

Sorry it’s been a little quiet around here of late, the new job is taking rather a lot of energy and time, but it’s all good.  However, I have managed a couple of social things recently, so thought I’d do a quick round up post.

Firstly, a couple of weeks ago, I headed down to Leicester one Saturday morning for the Crafty Sew and So meet up.  It was a bit of a last minute decision, but I decide I needed to be brave and make an effort to meet more sewists in real life.

We met up in a cafe opposite the shop in the middle of Leicester and I quickly found myself chatting to Louise, who I’ve been chatting to Instagram for some time but had never had the pleasure of meeting before.  Fuelled by some rather good food, we headed off around the market en masse before meeting back at the bricks and mortar shop.

Despite my best intentions, purchasing did happen:  from the market, an end of roll of Disney princess print jersey at a reduced rate (the only problem will be splitting it between the two kids!) and then from the shop itself, some floral viscose and a couple of patterns.

Had a lovely (and scary!) day at @craftysewandso today talking to lots of people (hence the scary) and probably over compensating by being loud: apologies! So lovely to meet IG people in real life, thanks everyone I got to chat to! This is my (actually quite restrained) haul, minus a child's sewing kit which has already been hidden for when she's earned it! #sewingkeepsmesane #sewciaists @louisemlewis @rhiannonbrum @amysewnintheattic @sewpositivity @rach_wain @englishgirlathome @dibsandthemachine @stitchodyssey @baylore and everyone else!

As usual, I found all the new people rather overwhelming, but I think I’m getting a little better at it, and also had the fun of catching up with some lovelies I’d met before, including Elle and Rhianon, so it was well worth being brave!

Then last Saturday, Sally and I headed over to Manchester for a day at the Stitching, Sewing and Hobbycrafts show at Event City.  Sally had got free tickets so it seemed like a good excuse for a day out.

We got there as it opened which was great; it meant we were able to sign up for a workshop on traditional block printing on fabric.  I surprised myself by really enjoying this!  It’s so not what I’d normally go for, but it was really therapeutic and, at £4 including materials, was really good value.

Sally and I spent a very pleasant hour playing with all the wonderful, hand carved wooden blocks and beautiful, bright fabric paints to create our own tote bags. 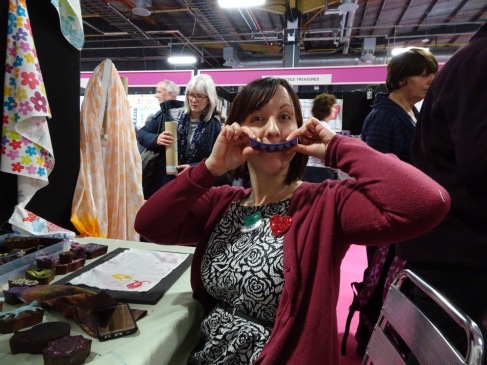 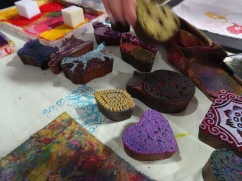 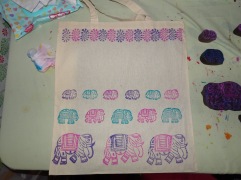 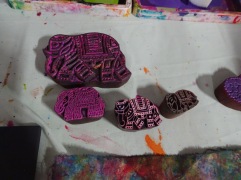 I did manage to resist spending a fortune on stamps after we’d finished the bags, but it was a close run thing!

There were a couple of (slightly random) exhibitions; giant cardigan, anyone?

There were some quilts on display which I always find interesting, if not inspiring.  I honestly can’t see me making anything like this, although I definitely admire the level of skill involved in these. 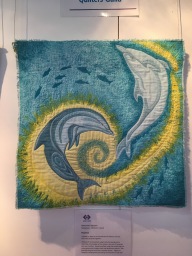 There was also a display of Japanese kimonos which were incredibly beautiful; wouldn’t you love an excuse to try one of these on?

I think that, as a dressmaker rather than crafter, this show is rather disappointing.  I went last year and though exactly the same thing, but we still had a great day (it’s all about the company).  Unsurprisingly, I did make a couple of purchases; namely

All in all, for me, it was pretty restrained!

We finished our day with a fab Japanese lunch in the Trafford Centre, where we started hatching plans for the next Sew Up North – watch this space!

Hopefully I can get around to blogging some of the things I’ve been making of late soon, but thanks to a poorly daughter, last night featured around 4 hours of sleep so I’m taking myself off to bed now.

(Thanks to Sally for the couple of photos I borrowed!)