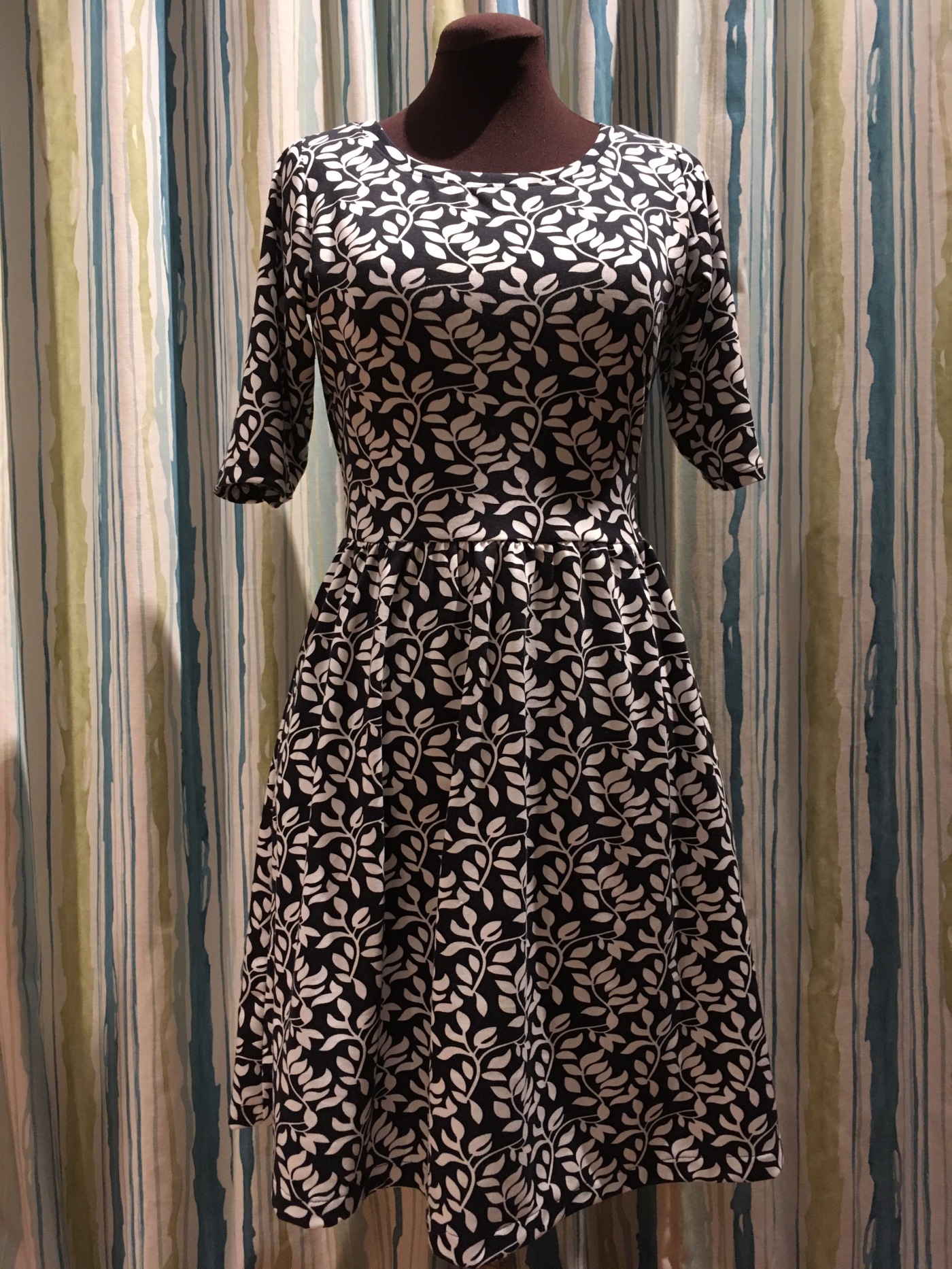 How’s your week going?  I’m writing this at home, snuggled up on the sofa, feeling like hell with this flu bug that’s going around. Which has meant zero sewing this week.  Which is pants.

But it does give me a chance to catch up a little on the blog, so long as I do it slowly as my brain isn’t functioning too clearly.

I thought I’d start with a dress which has been an unexpected success in my wardrobe.  This is my second version of the Colette Moneta.  I made my first one earlier in the year and opted for the short sleeved version.  And I was a little unsure about it; jersey dresses aren’t really something I’ve worn a lot but there are so many of them around on Instgram that ended up making one too.

I’m not sure why, as I love this dress on pretty much everyone else who’s made it?

Anyway, I saw this gorgeous ponte roma knit when Sally and I were nobly exploring fabric shops and arranging discounts for Sew Up North.  It was in the window of B&M and both Sally and I fell in love.  It’s a really stable knit, excellent quality, and it kind of feels snuggly inside. Sally and I both decided it was the perfect contender for a wintery dress; Sally blogged hers ages ago, using the Dixie DIY Ballet Dress pattern.

And this is my version; this time using the longer sleeves. 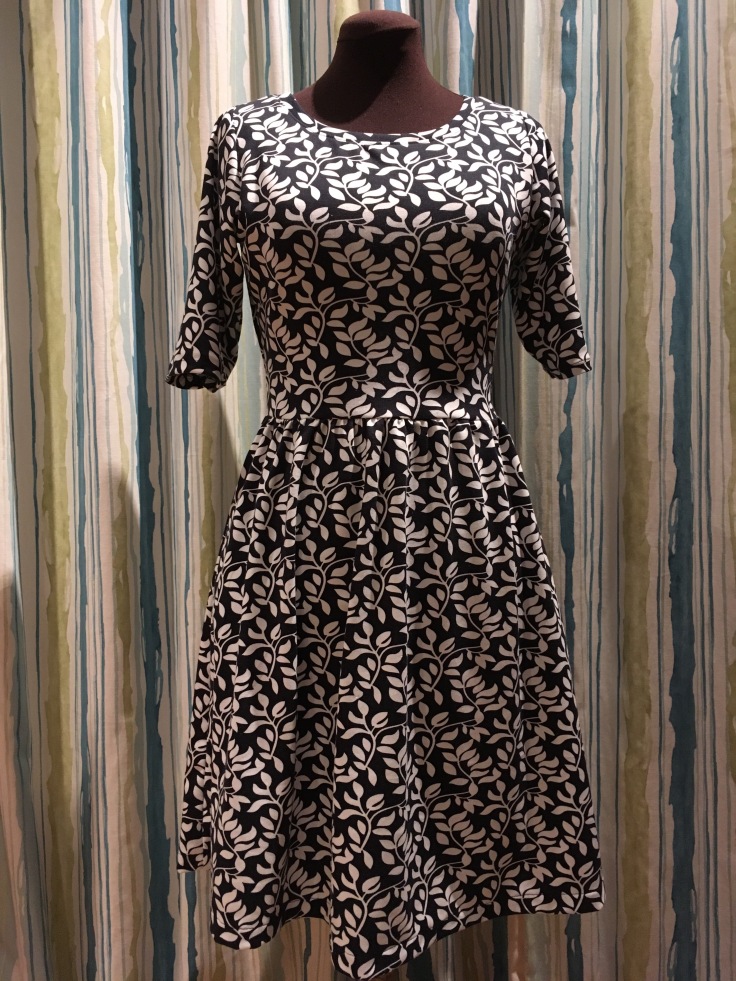 The print looks black and white here but actually it’s navy, which I much prefer.

When I thought about my previous version, one of the things I wasn’t happy with was the look of the neckline.  On this version, the pattern just has you fold the edge under and stitch it in place, which I don’t like so much.  So instead, I drafted myself a neck band and I’m much happier with it. 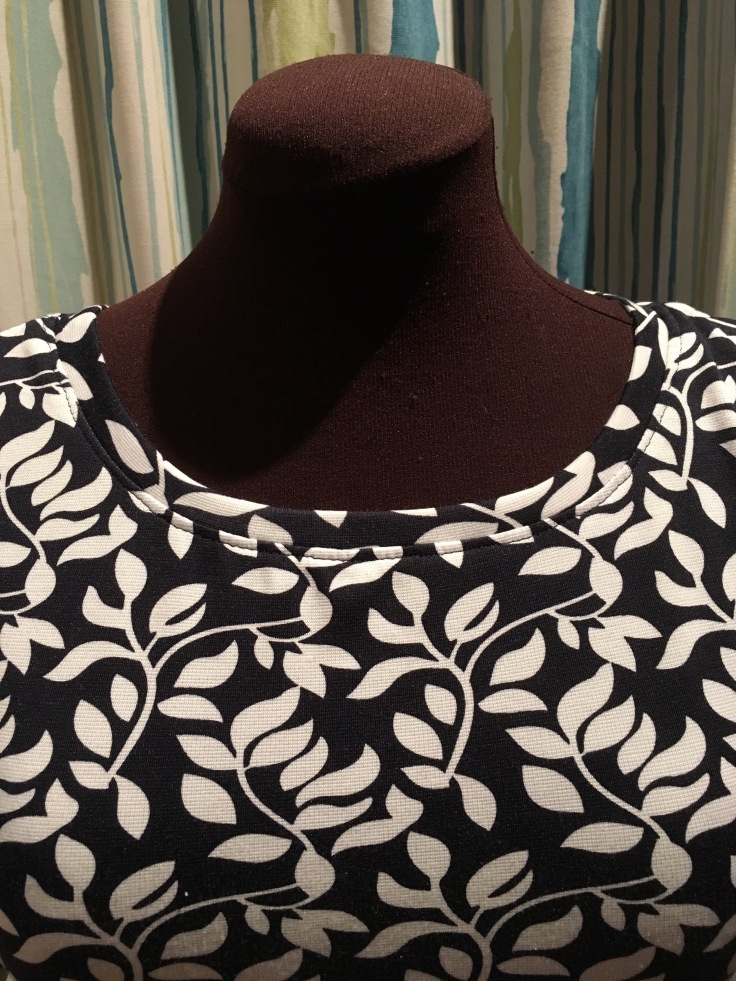 Drafting it was really easy: I made up the bodice by joining the shoulder seams, then measured the circumference using the edge of my tape measure.  I then multiplied this by 0.85 and added on the 3/8″ seam allowance I was using at each end to get the length.  Width wise, I worked out how much I wanted on show, doubled it and again added the seam allowance twice.  It’s attached as usual, by quartering both the neckline and neckband after it’s been stitched into a single band, pinning whilst stretching the neck band to get an (almost in this case) even finish and then stitching in place twice over.

I’m much happier with this finish, and have even worn the dress to work with a gold belt to glam it up a little. Some days you just need comfort, am I right? 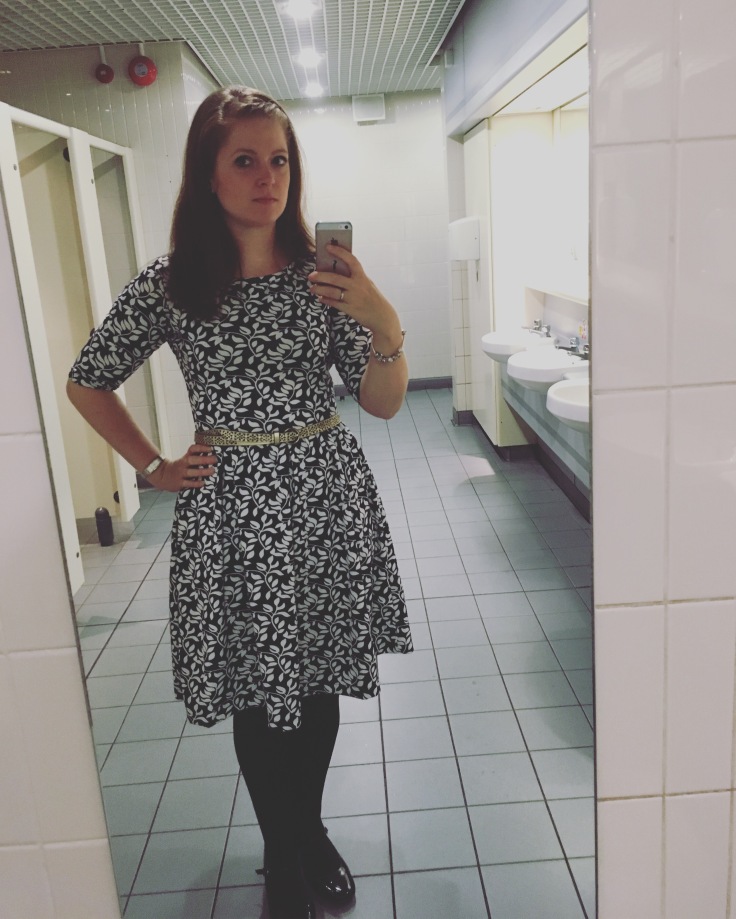 It still felt a little too casual for the office, but I think that is me, and the fact that it’s so cuddly AND has pockets overrides that; some days I need some secret pyjamas at work and this dress is definitely it!

So, once I feel human again, I have several other makes to catch up on blogging, but right now I’m going to retreat under my blanket with some more Lemsip. Lovely 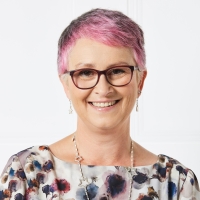 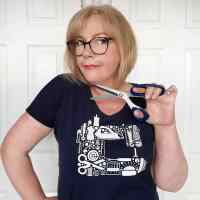